You are: Home > About

I blame the parents... 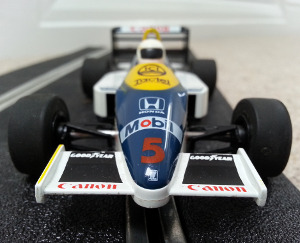 I've been an F1 fan since I was kid. My parents are F1 fans so I grew up watching the races on TV and playing with Scalextric. Reality F1 is my way of sharing my enjoyment of F1 with you. Game on.

Reality F1 (RF1) is a free, fantasy F1 competition. Players create a team comprising two drivers and two cars within a fixed budget. These teams then score points based on the performance of the real-life components in each race of the Formula 1 season. Unlike many online fantasy F1 games players can make changes to their team during the season (two free changes can be made at any time, subsequent changes incur a points cost). The winner of the competition is the player that has accrued the most points at the end of the season.

Players can opt to receive automated emails reminding them about upcoming races and, following a race, emails describing their team performance and current position within the Reality F1 championship.

Players can also create and/or join mini-leagues. These mini-leagues allow groups of friends or colleagues to compete against each other in a private competition.

In the dim and distant past (1999 and 2000 to be precise) a group of friends got together and took part in the BBC's Fantasy Formula 1 competition. After each race some luckless individual (i.e. me) would collate the scores and email them to the other players. After two years of competition, during which time players in our "mini-league" had won no less than three rounds of the competition (including myself, Spanish GP 1999) I decided that it would be fun to have a go at writing my own fantasy Formula 1 competition... and, for the 2001 F1 season, Reality F1 was born!

Originally I expected the game to be played by a few friends and colleagues but it's rapidly grown and become something much larger. Since 2001, Reality F1 has taken place every year without break and been played by more than 1000 people from many different countries. The competition is free and I want to keep it that way; the game is a way of promoting Formula 1 (a sport I love) and to add extra interest during each season rather than to make money.

So, think you're up to the challenge?

Although Reality F1 was originally designed with my friends in mind, all are welcome to compete...in fact, the more the merrier - and it is free. RF1 is meant to be fun; after all it's only a game...isn't it? The bottom line is if you've a good sense of humour and fancy competing in a fairly relaxed fantasy Formula 1 competition then please sign up.